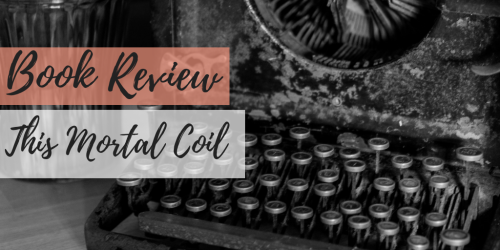 Series: This Mortal Coil #1
Release Date: 2nd November 2017
Publisher: Penguin Books
Pages: 464
Find it on: Goodreads. BookDepository. Waterstones.
Source: I picked a copy of this up in my local bookshop.

Catarina Agatta is a hacker. She can cripple mainframes and crash through firewalls, but that’s not what makes her special. In Cat’s world, people are implanted with technology to recode their DNA, allowing them to change their bodies in any way they want. And Cat happens to be a gene-hacking genius.

That’s no surprise, since Cat’s father is Dr. Lachlan Agatta, a legendary geneticist who may be the last hope for defeating a plague that has brought humanity to the brink of extinction. But during the outbreak, Lachlan was kidnapped by a shadowy organization called Cartaxus, leaving Cat to survive the last two years on her own.

When a Cartaxus soldier, Cole, arrives with news that her father has been killed, Cat’s instincts tell her it’s just another Cartaxus lie. But Cole also brings a message: before Lachlan died, he managed to create a vaccine, and Cole needs Cat’s help to release it and save the human race.

Now Cat must decide who she can trust: The soldier with secrets of his own? The father who made her promise to hide from Cartaxus at all costs? In a world where nature itself can be rewritten, how much can she even trust herself?

This book has been on my TBR for a while and I finally got around to picking it up. It was so fast-paced and exciting that I absolutely whizzed through it and I’m so glad I chose this one because I now cannot wait for book two. 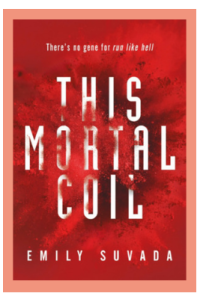 The world building in this book is so superb. There’s so much technology and science woven into the story and it’s well thought out and explained. Although there’s plenty of tech and science speak it’s well explained to the reader and doesn’t take over the story. This was probably my favourite aspect of the book, learning more about the virus and the genetic enhancements people have made.

The book is a fair size – nearly five hundred pages – but it is so action packed that it feels like quite a quick read. The chapters are also quite short a lot of the time and that definitely made me say ‘oh just one more’ on more than a few occasions. There’s plenty of surprise twists that I absolutely did not see coming and definitely made my brain explode. I also really liked the characters in This Mortal Coil. Cat is an excellent protagonist, she’s incredibly smart, stubborn and brave.

A slight word of warning though that romance does feature quite heavily within the plot. I’m not a particularly big fan of romance books so this was the one aspect of the story I didn’t really enjoy, I wanted to skip the romance and head straight for the action and the saving the world-y situation. Despite that I really enjoyed this story, it was original exciting and I definitely need to know what happens next.

One thought on “Book Review: This Mortal Coil – Emily Suvada”