Release Date: March 28th 2019
Publisher: Black and White
Pages: 400
Find it on: Goodreads. BookDepository. Waterstones.
Source: The publisher kindly sent me a copy of this book to review
Rating: 4/5 stars

A beautifully written, sweeping story of survival, community and love…

It it April 1939, and, in Berlin and Vienna, Esther and Kitty face a brutal choice. Flee Europe, or face the ghetto, incarceration, death.

Shanghai… They’ve heard it whispered that Shanghai might offer refuge. And so, on a crowded ocean liner, these women encounter each other for the first time.

Kitty has been lured to the other side of the world with promises of luxury, love and marriage. But when her Russian fiancé reveals his hand, she’s left to scratch a vulnerable living in Shanghai’s nightclubs and dark corners. Meanwhile, Esther and her daughter shelter in a house of widows until Aaron, a hot-headed former lover, brings fresh hope of survival.

Then, as the Japanese army enters the fray and violence mounts, the women are thrown together in Shanghai’s most desperate times. Together they must fight a future for the lives that will follow theirs.

I absolutely adored Juliet Conlin’s The Uncommon Life of Alfred Warner in Six Days so I was incredibly excited to pick up her newest release, The Lives Before Us. Set in 1939 the story follows three characters – Esther, Kitty and Yì as they attempt to escape from the violence and death that is spreading across the world at this dark moment in history. It is a powerful and emotional story that I found difficult to put down.

This is definitely the kind of story that sticks with you long after you’re finished reading. The story is told from the differing perspectives of the three characters who are each dealing with their own issues and struggles. They experience the horrors and hardships of a world at war but the story also focuses very much on the ideas of friendship and family at a time when so many are being persecuted.

I really liked all three characters – Kitty who is going to meet a fiance whom she discovers is already married, Yì is a young Chinese boy who has been badly treated all his life and Esther who is trying to escape persecution and protect her daughter. Each character brought a really unique perspective and they blended well to create a compelling tale.

I really enjoyed Conlin’s writing style in her previous novel and if possible I loved it even more in this book. It was so easy to sink into the book and be swept along in the story of these characters. The book was well paced and definitely gave me the opportunity to gain more knowledge about life during that time period. I also really liked the setting for this story – Shanghai – Conlin’s writing really brought it to life and it was fascinating reading about a place I know so little about.

The Lives Before Us is a gorgeously written, touching tale that fans of historical fiction will absolutely adore. If you’ve read The Uncommon Life of Alfred Warner, you’re definitely going to love this too. 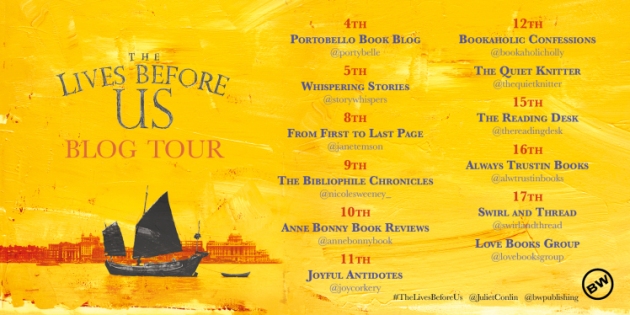