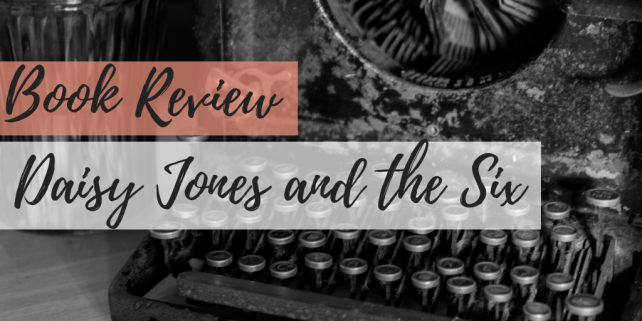 For a while, Daisy Jones & The Six were everywhere. Their albums were on every turntable, they sold out arenas from coast to coast, their sound defined an era. And then, on 12 July 1979, they split. Nobody ever knew why. Until now. They were lovers and friends and brothers and rivals. They couldn’t believe their luck, until it ran out. This is their story of the early days and the wild nights, but everyone remembers the truth differently. The only thing they all know for sure is that from the moment Daisy Jones walked barefoot onstage at the Whisky, their lives were irrevocably changed. Making music is never just about the music. And sometimes it can be hard to tell where the sound stops and the feelings begin.

Now I’m going to point out straight away that this is completely not the kind of book I would normally read. The majority of the books I read are Science Fiction and Fantasy, so this is completely outside of my comfort zone. I picked this up because of all the hype for this and another of Reid’s novels – The Seven Husbands of Evelyn Hugo – and thought it might be quite an interesting read. What I didn’t expect was to be absolutely blown away by this book, and have it be one of my new all-time favourites.

Daisy Jones and the Six is told in a really fascinating way, the book unfolds as a series of interviews – with the band recounting their time recording music and touring. The story is exclusively dialogue, there’s not really anything in the way of scenery descriptions or anything of that nature. Despite that the story completely came alive for me and I felt like Daisy and the band were real people – in fact by the time I was finished I wanted to google the band to learn more about them. The story really makes you feel like these people were real, and brings to life the sights and sounds of life in the 60s.

Daisy Jones and the Six holds nothing back and there’s plenty of drink, drugs and the difficulty of dealing with fame. It’s a fascinating tale and you get the sense early on that it’s going to end badly, yet you absolutely cannot look away.

The story is emotional and heart breaking in the best possible way and I honestly struggled not to bawl my eyes out at it on the way home from work. I don’t think I’ve ever read anything quite like Daisy Jones and the Six, and it’s definitely a book I keep thinking about despite finishing it a while ago.

I’m so glad I took the jump and tried something out of my comfort zone, because this is absolutely a new favourite. I’m incredibly keen to try more from this author and if you’ve seen the buzz around Daisy Jones and thought that the book isn’t your cup of tea I’d definitely suggest giving it a go – you might just find a new favourite.