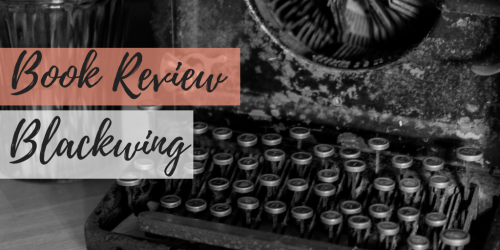 The republic faces annihilation, despite the vigilance of Galharrow’s Blackwings. When a raven tattoo rips itself from his arm to deliver a desperate message, Galharrow and a mysterious noblewoman must investigate a long dead sorcerer’s legacy. But there is a conspiracy within the citadel: traitors, flesh-eaters and the ghosts of the wastelands seek to destroy them, but if they cannot solve the ancient wizard’s paradox, the Deep Kings will walk the earth again, and all will be lost.

The war with the Eastern Empire ended in stalemate some eighty years ago, thanks to Nall’s ‘Engine’, a wizard-crafted weapon so powerful even the Deep Kings feared it. The strike of the Engine created the Misery – a wasteland full of ghosts and corrupted magic that now forms a No Mans Land along the frontier. But when Galharrow investigates a frontier fortress, he discovers complacency bordering on treason: then the walls are stormed, and the Engine fails to launch. Galharrow only escapes because of the preternatural magical power of the noblewoman he was supposed to be protecting. Together, they race to the capital to unmask the traitors and restore the republic’s defences. Far across the Misery a vast army is on the move, as the Empire prepares to call the republic’s bluff. 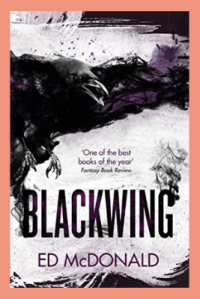 What can I say? This is one bloody brilliant book. Blackwing is set in a sort of post apocalyptic land, The Misery is a wasteland fraught with danger, monsters and who knows what else. The story follows Captain Galharrow, a man tasked with finding and executing any criminals who have fled into The Misery.

The book is full of action and excitement. It’s also very dark and vivid. Ed McDonald certainly holds nothing back and the reader is treated to all the sights, sounds and smells of life in this world. It felt like a very unique read, and unlike any other fantasy book I’ve ever read.

Blackwing also has quite a lot of terminology and names relevant to the story such as ‘Spinners’, ‘gracked’ and ‘darlings’. This was a little confusing at first, but you quickly pick up who is who as you delve into this absorbing story. This book is really fantastically written and in between the action the reader is treated to plenty of world building and explanation about the magic and monsters of The Misery.

The story’s main protagonist – Captain Galharrow is also a truly fascinating character. He’s straight to the point and unlikeable to many, but he’s also loyal and stands by those in his team. Galharrow is supported by some other really excellent characters – Nenn who I just loved, she’s battle crazy and has no nose, as well as Tnota who can find the team a route of just about anywhere, and Ezabeth the mysterious Spinner that Galharrow has to protect. The chracters were all really excellently portrayed as flawed human beings, and the story was all the more enjoyable for that.

Blackwing is a magnificent read. I was sucked in by the first few chapters and before I knew it I’d read half the book in one sitting. It has easily jumped into my top books for 2017. If you love books by authors like Mark Lawrence and Joe Abercrombie, you should pre-order this one now. It’s dark, gory and full of action and magic. I mean honestly what more could you possibly need? This is a stunning debut, and I definitely cannot wait to see what’s in store next!

✨What happens when you fall down the rabbit hole?✨ • • • I'm so excited to be participating in the @tandemcollectiveuk readalong for Wonderland by Juno Dawson. The readalong is starting today so if you have a copy definitely come and join us! This book sounds incredible and I can't wait to dive in. Make sure to check out all the beautiful photos from the bookstagramers taking part! #gifted #wonderland #wonderlandreadalong #aliceinwonderland #bookstagram #booksofinstagram #yabooks #junodawson #ukya #bookish #alice #bookblogger #quercusbooks #teambkmrk
✨ What book do you really need to pick up the sequel to?✨ • • I read and loved A Blade So Black last year and I definitely need to get my hands on a copy of A Dream So Dark! It's been on my wishlist for a while so I think I might pick it up on payday! 😍 #books #bookstagram #bookstagramer #abladesoblack #llmckinney #aliceinwonderland #fantasy #fantasytrilogy #thenightmareverse #titanbooks
✨May Wrap Up✨ • • • May was a great reading month! I managed 17 books and I loved quite a few of them. Hoping to get to just as many in June 💕 #books #bookblogger #bookstagram #booksread #bookish #booksofinstagram #ya #fantasy #mayreads #maywrapup
#blackouttuesday Ways you can help: https://blacklivesmatters.carrd.co/