On the broken world of Urdezha, Wendal Finn died on the hostile plains of the wasteland, one more casualty in the endless war between the city-dwellers and the clansfolk. But now Wendal has returned to his home city of Old Castle, possessed by something he brought back from the wasteland, something old and best left forgotten. The spirits are calling it Sycamore, an ancient entity out to avenge all victims of murder. And in a city like Old Castle, no one is innocent.

With his mind trapped inside a dead body, Wendal can do nothing but watch as Sycamore turns him into a serial killer. Until the magicians take an interest in him. Preserving Wendal’s body and trapping Sycamore inside it, the magicians now have the perfect assassin at their disposal. Whenever they need an enemy removed, they can set the killer loose on Old Castle. Between these moments of horror, Wendal struggles to piece together the remnants of his former life. He wants to know why his wife died while he was fighting in the war, but no one will tell him, no one wants him to know. Left to his own devices, Wendal picks at the scabs that cover the dark secrets of the magicians and reveals a threat to every city on Urdezha.

The clans are massing. A supernatural storm is raging across the wasteland. It has already destroyed one city, and now it is heading for Old Castle. And the only one who might prevent oblivion is the murderous entity who the spirits are calling Sycamore. 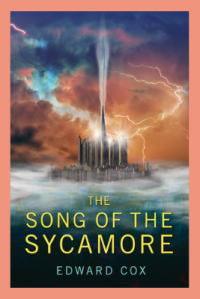 This is my first time reading a book by Edward Cox and I can tell you straight away it will not be my last. The Song of the Song of the Sycamore hooked me from the very beginning, and I could not put it down.

This complex tale tells the story of Wendal, who becomes a casualty of war and dies out in the wasteland. He awakes possessed by a mysterious entity known as Sycamore, a spirit hungry for vengeance. With no way of controlling the spirit Wendal must watch as Sycamore murders and destroys, all the while uncovering the dark secrets that surround the war between the people of the city and the clansfolk.

This is book is exceptionally dark and incredibly creepy. Told from both Wendal and Sycamore’s points of view, I loved getting to see things from both perspectives and Wendal/Sycamore made for a fascinating protagonist. The world building was also brilliantly done in the story and it was easy to dive into this complex world.

The plot was engaging and really kept me hooked from the outset. I almost missed my train stop on more than one occasion as I was so sucked into the story on my commute to work.  The story has plenty of dark moments, murder and action as well as a bit of a mystery surrounding the death of Wendal’s wife. Each layer of the plot was blended together seamlessly and it made for an unputdownable reading experience.

The Song of the Sycamore is definitely one of the most original books I’ve read in a while, and if you’re looking for an action packed story that will keep you on the edge of your seat, this is one for you. 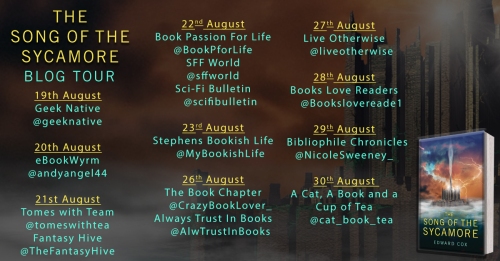