Things have been pretty busy at the moment and I haven’t been posted (or reading) as much as I’d like, but I’m hoping a Halloween themed readathon will be just the thing to get my reading back on track. I’m going to participate in Spookathon, the readathon run by BooksandLala, running 14th-20th of October. My TBR is going to be these beautiful books:

Ten years ago, college student Quincy Carpenter went on vacation with five friends and came back alone, the only survivor of a horror movie–scale massacre. In an instant, she became a member of a club no one wants to belong to—a group of similar survivors known in the press as the Final Girls. Lisa, who lost nine sorority sisters to a college dropout’s knife; Sam, who went up against the Sack Man during her shift at the Nightlight Inn; and now Quincy, who ran bleeding through the woods to escape Pine Cottage and the man she refers to only as Him. The three girls are all attempting to put their nightmares behind them, and, with that, one another. Despite the media’s attempts, they never meet.

Now, Quincy is doing well—maybe even great, thanks to her Xanax prescription. She has a caring almost-fiancé, Jeff; a popular baking blog; a beautiful apartment; and a therapeutic presence in Coop, the police officer who saved her life all those years ago. Her memory won’t even allow her to recall the events of that night; the past is in the past.

That is, until Lisa, the first Final Girl, is found dead in her bathtub, wrists slit, and Sam, the second, appears on Quincy’s doorstep. Blowing through Quincy’s life like a whirlwind, Sam seems intent on making Quincy relive the past, with increasingly dire consequences, all of which makes Quincy question why Sam is really seeking her out. And when new details about Lisa’s death come to light, Quincy’s life becomes a race against time as she tries to unravel Sam’s truths from her lies, evade the police and hungry reporters, and, most crucially, remember what really happened at Pine Cottage, before what was started ten years ago is finished.

Read something with red on the cover: This Lie Will Kill You – Chelsea Pitcher 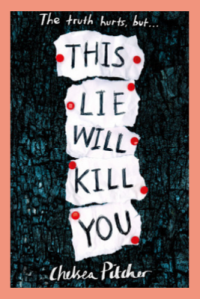 Tell the truth. Or face the consequences.

Clue meets Riverdale in this page-turning thriller that exposes the lies five teens tell about a deadly night one year ago.

One year ago, there was a party.
At the party, someone died.
Five teens each played a part and up until now, no one has told the truth.

But tonight, the five survivors arrive at an isolated mansion in the hills, expecting to compete in a contest with a $50,000 grand prize. Of course…some things are too good to be true. They were each so desperate for the prize, they didn’t question the odd, rather exclusive invitation until it was too late.

Now, they realize they’ve been lured together by a person bent on revenge, a person who will stop at nothing to uncover what actually happened on that deadly night, one year ago.

Five arrived, but not all can leave. Will the truth set them free?
Or will their lies destroy them all?

Read something with a spooky word in the title: The Witch of Willow Hall – Hester Fox

Two centuries after the Salem witch trials, there’s still one witch left in Massachusetts. But she doesn’t even know it.

Take this as a warning: if you are not able or willing to control yourself, it will not only be you who suffers the consequences but those around you, as well.

In the wake of a scandal, the Montrose family and their three daughters—Catherine, Lydia, and Emeline—flee Boston for their new country home, Willow Hall. The estate seems sleepy and idyllic. But a subtle menace creeps into the atmosphere, remnants of a dark history that call to Lydia, and to the youngest, Emeline.

All three daughters will be irrevocably changed by what follows, but none more than Lydia, who must draw on a power she never knew she possessed if she wants to protect those she loves. For Willow Hall’s secrets will rise, in the end…

Read something set in a spooky location: The Lost Ones – Anita Frank

Some houses are never at peace.

Reeling from the death of her fiancé, Stella Marcham welcomes the opportunity to stay with her pregnant sister, Madeleine, at her imposing country mansion, Greyswick – but she arrives to discover a house of unease and her sister gripped by fear and suspicion.

Before long, strange incidents begin to trouble Stella – sobbing in the night, little footsteps on the stairs – and as events escalate, she finds herself drawn to the tragic history of the house.

Aided by a wounded war veteran, Stella sets about uncovering Greyswick’s dark and terrible secrets – secrets the dead whisper from the other side…

In the classic tradition of The Woman in Black, Anita Frank weaves a spell-binding debut of family tragedy, loss and redemption. 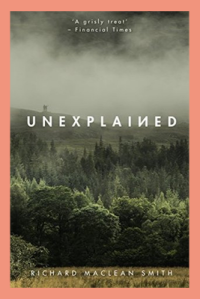 Based on the ‘world’s spookiest podcast’ of the same name comes Unexplained: a book of ten real-life mysteries which might be best left unexplained. . .

To this day, these real life mysteries and very many more evade explanation.

Based on one of the most successful paranormal podcasts ever, with over 10 million streams and downloads to date, Unexplained consists of ten chapters focussing on a different paranormal event, from Australia to Germany, the UK to Zimbabwe, using the stories as gateways to a journey beyond the veil of the uncanny, exploring what they reveal of the human experience.

Taking ideas once thought of as supernatural or paranormal and questioning whether radical ideas in science might provide a new but equally extraordinary explanation, Unexplained is The Examined Life meets The X Files.

So those are the books I’m hoping to tackle for Spookathon! If you’ve read any of them I’d love to know what you thought, and if you’re participating, definitely let me know what you’re planning to read!