Find it on: Goodreads. Amazon.

Source: The publisher kindly sent me an E-ARC via Netgalley.

The brand new novel from Michelle Kenney, author of the Book of Fire and City of Dust! As Talia treks back through the treacherous North Mountains, she knows only three things: Pantheon has stolen nearly everyone she loves; Her blood is the only control over the Voynich’s oldest secret; And Cassius won’t stop hunting Arafel until every last outsider is destroyed. Will Talia finally face her legacy and defeat Cassius before it is too late?

The Book of Fire series is fast becoming one of my favourite series of all time. I fell in love with the world and the characters in Book of Fire and I absolutely adored City of Dust. I was so excited to pick up the third instalment in the series and had incredibly high expectations. I of course loved every second of this fast paced and exhilarating story that I didn’t want to end.

As this is the third and final instalment in the series I won’t say too much about the plot of the book as I really don’t want to spoil this brilliant series for anyone. Storm of Ash probably could be read as a standalone but you’re definitely better off catching up on the first two books before setting off.

Talia is a fantastic protagonist, she’s such an interesting character and I’ve loved seeing her on this adventure, growing as a character as she battles Cassius and the pantheon. She’s a strong and determined character and you’ll be rooting for her right to the very end.

I really love Michelle Kenney’s writing style. It’s vivid and addictive and it’s so easy just to get swept along in this epic tale of good versus evil. The world building is also exceptional, everything is well fleshed out and you’re given plenty of opportunity to understand the world.

The Book of Fire series is everything I love about YA fantasy. It’s a strong compelling series that I can’t recommend highly enough and I’m so looking forward to read more from Michelle Kenney. 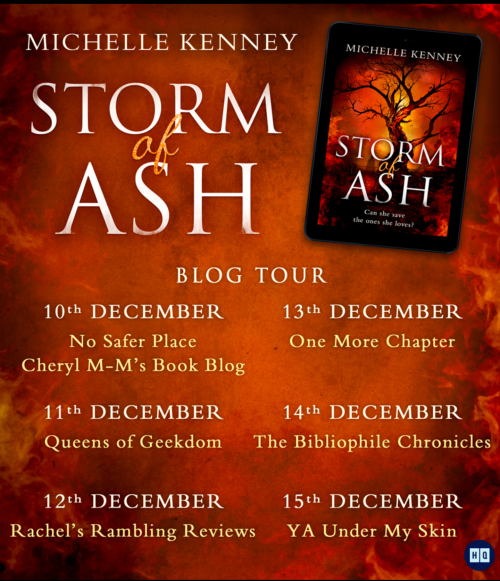