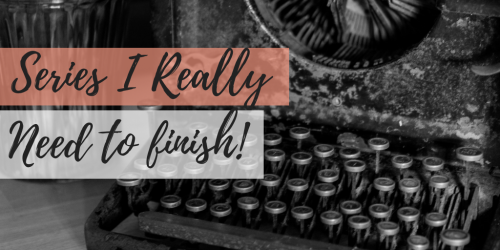 I have a really terrible habit of starting a series and reading a few and then not completing it. It’s one of my goals for 2020 to try and finish off some of the ones I already have on my shelf so I thought it would be fun to make a list of all the ones I REALLY need to get to.

This has been one of my favourite series of all time, I read Godblind and Darksoul and they were five star reads, I bought Bloodchild as soon as it was published but I still haven’t gotten around to reading it yet.

2. Caraval – Stephanie Garber
Caraval is much the same as Godblind. I read and adored the first two books, bought Finale straight away, but I haven’t picked it up yet – think I have a problem!

I was very late to the Six of Crows party but I read Six of Crows last year and loved it. Crooked Kingdom was one of my high priority reads for the end of the year but I never got to it, despite reading pretty much everything else Leigh Bardugo has written.

4. The Raven’s Mark – Ed McDonald
The Raven’s Mark series is just incredible and I think part of the reason I haven’t picked up the third and final book is honestly I just don’t want it to end. The second book also broke me a little bit and I’m sort of scared what Ravenfall might have in store for me.

I read and loved the Sweep books growing up and I’ve been slowly revisiting them as an adult. I own copies of them all but I’ve currently only reread up to book nine. I’d really love to get the final six read in 2020!

6. Rebel of the Sands – Alwyn Hamilton
I was going to a book event and Alwyn Hamilton was the chair so I thought I might pick up Rebel of the Sands to see what it was like. I ended up binging it in one day and I bought books two and three at the event. Even though I gave it five stars I still haven’t gotten around to reading the last two books in the series.

Mark Lawrence’s time travel series has been such a brilliant fun series to read over the last year and I am really excited to get to book three. It only came out this month but I’m putting it on here so it doesn’t become like some of the others I haven’t picked up.

8. Throne of Glass – Sarah J. Maas
Throne of Glass is an odd one for me. I read and really enjoyed the first three books a number of years ago, but haven’t picked up the rest in the series. I’d probably have to reread them now to remember the story, and I’m not entirely sure I would enjoy them as much as my taste has changed a bit since then. It would be pretty interesting to give them a go though!

Red Queen is much the same as Throne of Glass, I read and loved the first few but I’m not sure how I would feel reading them years later. I would love to know how it all ends though so I definitely think I should try picking them back up!

10. DC Icons – Various Authors
When this series came out I was so excited because I love the DC Universe. I read book one Wonderwoman Warbringer and loved it. Book two I really enjoyed and I bought a copy of book three but haven’t read it or number four. I haven’t heard all that much about either but I’d really love to finish the series off.

So those are just some of the series I really need to get to this year. Are there any series you would love to finish in 2020? Let me know!

6 thoughts on “Series I Really Need to Finish!”