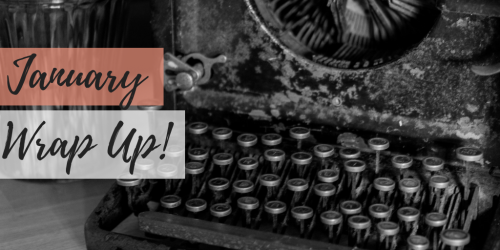 January was a really good reading month. I only managed to read eight books, but I gave everything 3.5 stars or above, which I’m really pleased about. I think I’m getting better at knowing if something is going to be to my taste before I pick it up. I also managed to read five of the eight books I put on my monthly TBR so I’m pretty pleased with that. So let’s dive into the books I read in January!

This fast paced and clever thriller follows a group of kids who start playing a mysterious game known only as the G.O.D. Game. Do what it wants and you win prizes, but refuse and you could wind up dead. It was action packed and I loved the group dynamic the super intelligent kids working together to defeat the game – definitely a great way to start off my 2020 reading. (5/5 stars)

I finally picked up the first book in The Witcher series after having meant to read it for absolutely ages. I really enjoyed this introduction into the world of monsters and magic, and I’m so looking forward to continuing on the series. This book is a short story collection so it was really easy to dip in and out of the book. (4.5/5 stars)

This is the first in a three part series featuring characters from the Marvel Universe. The story follows Loki as he is sent on an assignment to Earth. It’s a fun read and I enjoyed getting to see more of Loki and really getting to know his character. I did feel the story was a bit on the predictable side and preferred the first half of the book where Loki is in Asgard. (3.5/5 stars)

This was my first time reading a book by Cara Hunter and I completely loved this addictive, fast paced thriller. The story follows the abduction of a young girl who escapes her captor. She’s reluctant to talk to police, but another girl also goes missing so she has no choice but to tell the police her secrets. This book had so many twists I didn’t see coming and I can’t wait to read more from this author. (4.5/5 stars)

This is a fascinating story about a world in which genetic modifications have taken over the planet – but how far is too far? It’s a great action/adventure story featuring a kick-ass main character and plenty of high stakes moments. It gave me serious hunger games vibes and I’m really hoping for a sequel. (3.75/5 stars)

I’ve always wanted to read The Disasters so I was so excited when I got an ARC of Spellhacker. This unique and engaging story features a heist gone wrong, a brilliant squad of characters and a community helping corporation who might not be as goody goody as they appear. I raced through this because it was just such an addictive read and I’m definitely going to pick up a copy of The Disasters. (4/5 stars)

7. All the Wandering Light – Heather Fawcett

This is the sequel to Even the Darkest Stars a book I absolutely loved when I read it in 2018. The story follows the same characters the really fascinating world that Fawcett has created, but somehow it didn’t grab me quite as much as the first book did. I still really enjoyed it and think it made for a really terrific ending to the story. (4/5 stars)

8. A Queen in Hiding – Sarah Kozloff

A Queen in Hiding was definitely my favourite book of January. I completely fell in love with this epic fantasy tale of Queen Cressa and her daughter, fighting to keep the throne from those who wish to overthrow her. It was full of heart stopping moments, brilliant characters and plenty of epic battles. I’m desperate to get my hands on book two, but fortunately Sarah Kozloff is releasing the four part series over the course of four months, so I won’t have to wait too long for book two! (5/5 stars)

So those are the books I read in January! I’d love to know what your favourite read of the month was, and if you’ve read any of these what you thought!

7 thoughts on “January Wrap Up!”