In her forest-veiled pagan village, Évike is the only woman without power, making her an outcast clearly abandoned by the gods. The villagers blame her corrupted bloodline—her father was a Yehuli man, one of the much-loathed servants of the fanatical king. When soldiers arrive from the Holy Order of Woodsmen to claim a pagan girl for the king’s blood sacrifice, Évike is betrayed by her fellow villagers and surrendered.

But when monsters attack the Woodsmen and their captive en route, slaughtering everyone but Évike and the cold, one-eyed captain, they have no choice but to rely on each other. Except he’s no ordinary Woodsman—he’s the disgraced prince, Gáspár Bárány, whose father needs pagan magic to consolidate his power. Gáspár fears that his cruelly zealous brother plans to seize the throne and instigate a violent reign that would damn the pagans and the Yehuli alike. As the son of a reviled foreign queen, Gáspár understands what it’s like to be an outcast, and he and Évike make a tenuous pact to stop his brother.

As their mission takes them from the bitter northern tundra to the smog-choked capital, their mutual loathing slowly turns to affection, bound by a shared history of alienation and oppression. However, trust can easily turn to betrayal, and as Évike reconnects with her estranged father and discovers her own hidden magic, she and Gáspár need to decide whose side they’re on, and what they’re willing to give up for a nation that never cared for them at all. 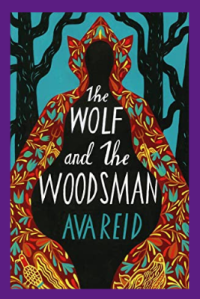 The Wolf and the Woodsman is the dark and captivating tale of Évike, the only woman in her pagan worshipping village without magic. When the king demands a pagan girl as a blood sacrifice, the village offers Évike up. En route to the capital with the deadly Woodsman, they are attacked, leaving only Évike and the captain left alive. She soon learns he is more than he seems and the two must reluctantly team up to stop an attempt to seize the throne that will have catastrophic repercussions for both the pagans and the Yehuli people.

I’ve been trying to find a book that will fill the hole left by Katherine Arden’s Winternight Trilogy and this is absolutely it. With beautiful writing and a wonderful fairytale-style story, The Wolf and the Woodsman completely sucked me in and stole my heart. This book has immediately catapulted to one of my favourite books of all time. I loved everything about this book. Reid has a really lyrical writing style, the world she has created practically leaps off the page and I was completely fascinated by the magic in this story. There is lots of body horror and quite a bit of gore in the story, but it’s an incredibly well-executed story, and one I did not want to end.

One of the things I loved most about this story is the incredible characters Reid has created. Évike is a really compelling protagonist, attempting to understand where she fits in the world being half pagan and half Yehuli. Gáspár is similarly a really fascinating character and I loved watching the relationship between the two develop as the story unfolds. The story is steeped in Jewish folklore and mythology, which I found completely fascinating. The story also very much focuses on the horrors of religious persecution and ethnic cleansing, inspired by events in Hungarian history.

The Wolf and the Woodsman is the sort of book that I was completely torn between racing through to see how it ended and taking my time to savour every moment. This is an incredible debut, and I cannot wait to read more from Ava Reid. It’s definitely the kind of book that stays with you long after you’ve finished reading. This book has already been getting quite a bit of hype and it is absolutely well deserved. If you’re a fan of books by Katherine Arden and Naomi Novik, this is a must-read.

One thought on “Book Review: The Wolf and the Woodsman – Ava Reid”