The countdown has begun…

True-crime podcaster Elle Castillo has been obsessed with The Countdown Killer for decades. Twenty years ago, he established a gruesome pattern of taking and murdering three girls over seven days, each a year younger than the last. No one’s ever known why he followed this pattern, or why they stopped abruptly after the eleventh victim. Most believe him to be dead. Elle knows he is not and is hellbent on serving historic justice.

When the kidnappings start up once again, Elle must confront her responsibility in forcing the killer out of hiding. She needs to stop the deadly countdown and convince both the authorities and her podcast audience before the Countdown Killer can claim his next victim. 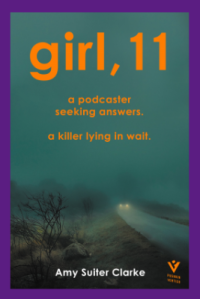 Girl, 11 is a dark and twisty thriller that follows Elle Castillo – a true-crime podcaster from the hit show Justice Delayed. After several successful seasons of the show, Elle focuses on The Countdown Killer, a case that she has been obsessed with for decades. With no leads, the case has gone cold and the killer’s pattern of murdering three girls over seven days has stumped investigators. Everyone believes The Countdown Killer must be dead, but Elle is determined to uncover the truth and get justice for the families of the victims. When the kidnappings start again, Elle knows she’s in a race against time to uncover the truth before he strikes again.

Girl, 11 is one of those books where you sit down to read a chapter or two and find yourself still completely absorbed in the story hours later. For me, I made the mistake of starting this book before bed and got so hooked that I kept reading until the wee hours of the morning. This was such a well-crafted story, with plenty of twists and turns I did not see coming. I loved the podcast angle of the story and the way Suiter Clarke weaved in the transcripts from the show. This definitely made the story feel more real and kept me turning pages faster and faster as the story progressed.

From the beginning, the story sets quite a quick pace and towards the end, the tense atmosphere had me on the edge of my seat. There were more than a few surprise moments I didn’t see coming and I felt that the podcast focus brought a fresh take to the serial killer story. Elle was quite an interesting protagonist and I enjoyed seeing her work with the police in an attempt to uncover the truth. Girl, 11 is an impressive debut and I cannot wait to see what Amy Suiter Clarke writes next. If you’re looking for a thriller that will keep you engrossed from the very first page, Girl, 11 is definitely one to check out – just don’t do what I did and start it before bed, because you’re sure to be sleep deprived the next day. 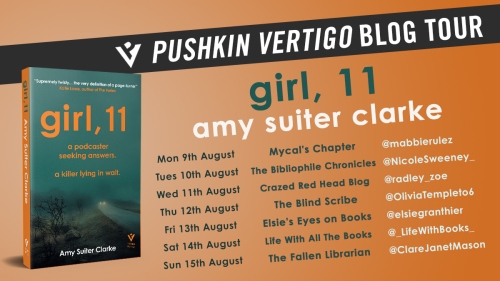