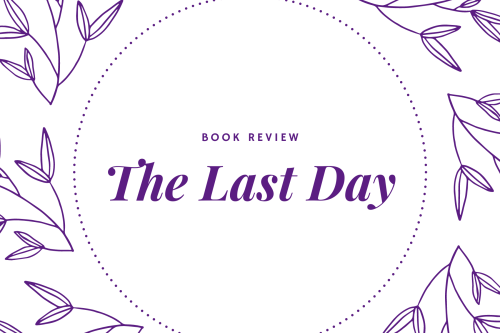 One half suffers an endless frozen night; the other, nothing but burning sun.

Only in a slim twilit region between them can life survive.

In an isolationist Britain, scientist Ellen Hopper receives a letter from a dying man.

It contains a powerful and dangerous secret.

The Last Day is a futuristic thriller set in 2059, when the world stops turning. This leads to a there only being a small part of planet Earth that’s habitual, with one half frozen in the dark and the other burning in the sun. Ellen Hopper is a scientist on a rig in the ocean when she receives a letter from an old college professor. She wants nothing to do with him, but Edward Thorn is dying and has some dangerous secrets. When Ellen goes to visit him, it sets her on a path to uncover the truth behind Thorn’s work – but she’s not the only one looking for the information.

The Last Day had quite a lot of buzz about it and it sounded like such a fascinating premise. I loved the concept, the idea of a world that stops turning and is plunged into chaos. Unfortunately I just didn’t gel with this book. The story was a lot slower paced than I was expecting and it took me quite a while to get through the pages. I found there was quite a lot of info-dumping, pages detailing the history since the world had stopped turning and the tensions between the British and American people. I think because of this I lost interest in the story, so even when the page did pick up, it still didn’t hold my interest.

Hopper was an interesting protagonist, but I didn’t find her particularly likeable. I think this was the other reason that I didn’t mesh so well with the book. I had sort of been expecting a fast paced thriller in a world that was half in darkness and half in the burning daylight and it was more a race to uncover the truth behind her old mentor’s work. I guess a few of the twists quite early on too, which meant I wasn’t racing to find out how it was going to end. The Last Day didn’t work for me, but if you’re a fan of political thrillers with characters chasing clues all around a city, this could be just your kind of book.