Ivy, Mateo, and Cal used to be close. Back in middle school they were best friends. So, when Cal pulls into campus late for class, and runs into Ivy and Mateo, it seems like the perfect opportunity to turn a bad day around. They’ll ditch school and go into the city. Just the three of them, like old times. Why did they stop hanging out, anyway?

As soon as they pull out of the parking lot Cal knows why. Ivy’s already freaking out about missing class, and heartthrob Mateo is asleep in the backseat, too cool to even pretend like he wants to be there. The truth is they have nothing in common anymore.

At least they don’t until they run into the fourth student ditching school that day. Brian “Boney” Mahoney is supposed to be accepting his newly won office of class president. Which is why Ivy follows him into an empty building, only to walk into the middle of a murder scene. Cal, Ivy, and Mateo all know the person lying on the ground of that building, and now they need to come clean. They’re all hiding something. And maybe their chance reconnection wasn’t by chance after all. 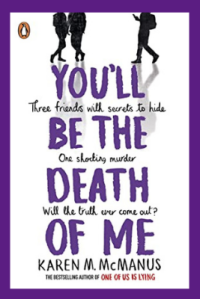 Queen of YA crime Karen M. McManus is back with a new thriller – You’ll Be the Death of Me. The story follows three students – Ivy, Cal and Mateo. They used to be close but have drifted apart. When the three run into each other in the school car park, it seems like the perfect opportunity to recreate the best day ever. They skip school, heading into the city for a day of fun. The three friends quickly realize they don’t have much in common anymore, but when they run into another student skipping, they decide to follow him. The three friends then find themselves wrapped up in a murder investigation and learn their random meet-up might not have been random at all.

So far I’ve read all of McManus’s books and each one has been a fast-paced, twisty read. You’ll Be the Death of Me is no exception. The story gripped me right from the beginning, with plenty of moments I just did not see coming. You’ll Be the Death of Me is an easy book to get caught up in and the short chapters had me turning pages quicker and quicker. Over the course of the book, I developed multiple theories about what was going on – all of which turned out to be wrong.

The story is well-paced and it has a really intriguing premise. I’ve seen it described as ‘Ferris Bueller’s Day Off with murder’ and if that doesn’t intrigue you I don’t know what will. I really liked all three of our main protagonists and it was fascinating watching how the group dynamic changed as their secrets were revealed. Ivy was probably my favourite of the three, however, all of them were really interesting and well fleshed out.

If you’re looking for a fast-paced YA thriller to keep you hooked on a long winter night, You’ll Be the Death of Me absolutely has you covered. This was a hugely enjoyable read and I cannot wait to see what McManus writes next. 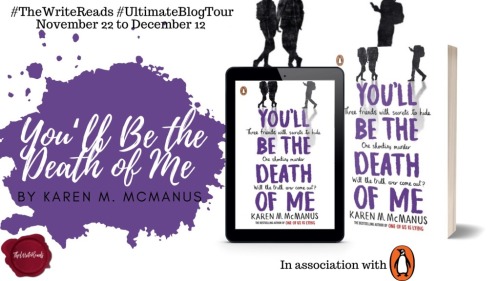 One thought on “Blog Tour: You’ll Be the Death of Me – Karen M. McManus”