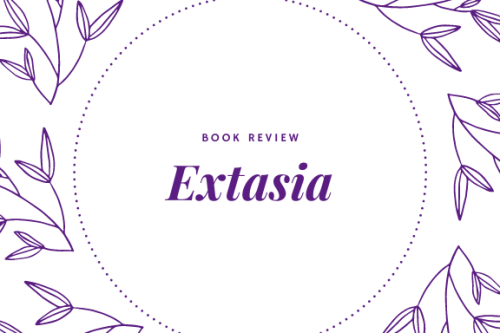 Her name is unimportant.

All you must know is that today she will become one of the four saints of Haven. The elders will mark her and place the red hood on her head. With her sisters, she will stand against the evil power that lives beneath the black mountain–an evil which has already killed nine of her village’s men.

She will tell no one of the white-eyed beasts that follow her. Or the faceless gray women tall as houses. Or the girls she saw kissing in the elm grove.

Today she will be a saint of Haven. She will rid her family of her mother’s shame at last and save her people from destruction. She is not afraid. Are you?

This searing and lyrically written novel by the critically acclaimed author of Sawkill Girls beckons readers to follow its fierce heroine into a world filled with secrets and blood–where the truth is buried in lies and a devastating power waits, seething, for someone brave enough to use it.

Extasia is a YA horror novel sent in a dystopian future. The story follows Amity a young woman who is about to become a saint of Haven – the last town on Earth. Amity wants nothing more than to become a saint and help protect her village from the evil that lies beneath the mountain. An evil that has been spreading and killing the men of Haven. As tensions begin to grow in Haven Amity must uncover the truth behind the killings and save the townspeople from destruction.

Extasia is a really interesting standalone novel and it felt completely unlike anything I’d read before. I really enjoyed the first half of the story, which felt a bit similar to The Year of the Witching. It was dark and I was fascinated with Amity uncovering the mysteries of Haven and learning how to control her powers. The story had a fantastic setting and was full of atmosphere but I felt towards the end that the story unraveled a little bit, there was a bit too much going on and the ending felt a bit rushed. Extasia feels like a brilliant novel in concept but missed the mark a little bit in terms of execution.

Despite enjoying the second half of the book less it was still overall an enjoyable read. The story is really fast-paced and I ended up reading it really quickly. I also liked Legrand’s writing style and it was easy to get absorbed in the story. I did also like the characters and while I’m not particularly a romance fan, I did think it was well done in this book. The story is a dark one and there are plenty of gory moments in this story. While this one was a little bit of a disappointment, I am definitely going to try more books from Claire Legrand. I have no doubt that fantasy/horror fans looking for a dark feminist tale will absolutely fall in love with this book.