WHO IS TO BLAME WHEN NO ONE IS INNOCENT?

The papers want blood.
The force wants results.
The law must be served, whatever the cost.

July 1973. The Glasgow drugs trade is booming and Bobby March, the city’s own rock-star hero, has just ODed in a central hotel.

Meanwhile the niece of McCoy’s boss has fallen in with a bad crowd. When she goes AWOL, McCoy is asked–off the books–to find her.

McCoy has a hunch. But does he have enough time?

Bobby March Will Live Forever is the third instalment in Alan Parks’ Harry McCoy series. This time we’re following Harry as the drug trade is taking over Glasgow. When twelve year old Alice Kelly goes missing and rock star Bobby March over doses in a hotel room, the press churns up a storm. There’s pressure on the force to get results, but will Harry have be able to uncover the truth in time?

The Harry McCoy series is dark and gritty crime fiction at its best. Set in the 1970s, Parks paints a grim picture of a city with a hard criminal underworld. Like the previous two instalments this is a fast paced tale and one that hooks you from the very first pages. I’ve really enjoyed the previous two books in the series but Bobby March Will Live Forever is my favourite in the series so far. Harry is a really fascinating protagonist – he’s stubborn, determined to get the job done, but he also has trouble witnessing gory crime scenes and has a complicated relationship with gangster friend Stevie Cooper. It was really interesting to see Harry not be the lead on these cases but be forced to the sidelines by Raeburn too. Parks creates really realistic characters and I can’t wait to read more about them in the next instalment of this series.

Bobby March Will Live Forever is a really compelling story, and Parks weaves all the different threads together to create an ending I didn’t see coming at all. One of the things that really fascinates me about this series is that I live just outside Glasgow so it’s really interesting to see the city come alive in Parks words. All of the books in this series are brimming with atmosphere and are difficult to put down. If you’re looking for a police procedural series to binge read, the Harry McCoy series will definitely keep you hooked. This was such an entertaining read and I’m looking forward to seeing where Parks takes us in The April Dead. 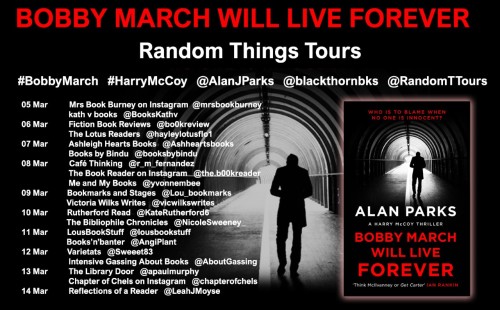