When an American sailor from the Holy Loch Base goes missing, Harry McCoy is determined to find him. But as he investigates, a wave of bombings hits Glasgow – with the threat of more to come. Soon McCoy realises that the sailor may be part of a shadowy organisation committed to a very different kind of Scotland. One they are prepared to kill for.

Meanwhile Cooper, McCoy’s long-time criminal friend, is released from jail and convinced he has a traitor in his midst. As allies become enemies, Cooper has to fight for his position and his life. He needs McCoy to do something for him. Something illegal.

McCoy is running out of time to stop another bomb, save himself from the corrupt forces who want to see him fail and save the sailor from certain death. But McCoy discovers a deeper, darker secret – the sailor is not the first young man to go missing in April. 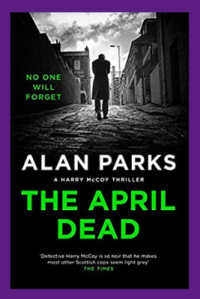 The April Dead is the fourth heart pounding instalment in Alan Parks’ Harry McCoy series. This time we’re following Harry as he investigates bomb explosions in Glasgow. When Harry learns there might be more bombs on the way, he knows he’s running out of time to find out who’s behind it. As Harry digs deeper he finds way more than he bargained for.

Just like the previous books in this series, The April Dead is a dark and gritty read. It really brings to life the violent criminal underworld of Glasgow, and it’s hard to look away from this tense and gripping story. Harry McCoy has become one of my favourite detectives and it’s fascinating seeing him attempt to uncover the truth. I love the way Parks has created a really unique detective, one who saves the day but is also close friends with a crime boss. I also like the way Parks has created a detective who can’t stand the sight of blood which is something I’ve never encountered before. Along with the high stakes of his job Harry is also dealing with a stomach ulcer in this instalment and in typical Glasgow fashion continues to drink and smoke despite the pains. I also really like seeing how the friendship between Harry and Wattie has developed as the series progresses. Wattie has gone from the new boy to Harry’s partner and the razor sharp banter between the two is always great.

The April Dead is full of twists and turns and it makes for a really compelling read. Like the previous books I had no idea how it was going to end and the final few chapters had me on the edge of my seat. This is a fast paced read and I loved all the details Parks put in to bring the streets of Glasgow to life. The entire series is full of atmosphere and Parks has created a series that crime fans will not be able to get enough of. If you’ve read the other books this one is absolutely worth picking up. If you’ve not had a chance to start this series, it’s a fantastic set of books to get sucked into.