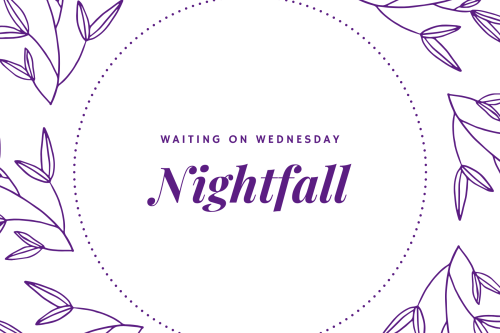 The sky is filled with dragons: the people are ready to burn the regime to the ground.
The seas churn with monsters and the tide is changing: revolution is coming.
Steiner has at last realised the part he will play in this fight.
Kimi knows now what it is to lead, but must learn to overcome differences if she is to unite and defeat the dragon factions.
Silverdust inches towards a final revenge.

Across the ocean, Kjellrun feels the call of war. But she must reconcile her new responsibilities to the people of the temple with the urge to find her family.
Leaders, all – and all are desperate. For the Emperor will not give up easily. He will rule – and he cares not if his subjects are alive… or if they are dead.
Worlds and outlooks collide, wars begin and lives will end in this spectacular finale by a new master in the fantasy genre. The stakes have never been higher in the roaring conclusion to the beloved Ashen Torment series. 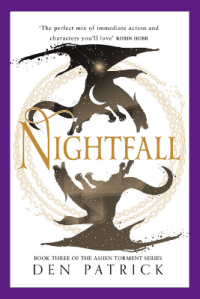 Welcome to another waiting on Wednesday! This week I’m talking about Nightfall, the third and final book in the Ashen Torment series. I actually hadn’t heard much about the release of this at all – it’s still showing as untitled and without a cover on Goodreads. I then came across a mention on Twitter with that stunning cover and it made me so excited to pick this one up. Den Patrick’s Erebus Sequence is one of my favourite fantasy series of all time and Witchsign was one of my favourite books of 2018. (I haven’t actually read book two Stormtide yet, but it is very high on my priority list). I completely fell in love with the characters in this series and I’m so excited to see what the rest of the series brings. The Ashen Torment books are set in such a fascinating world and it’s one of those stories you absolutely cannot put down. Nightfall is publishing August 20th from HarperVoyager. 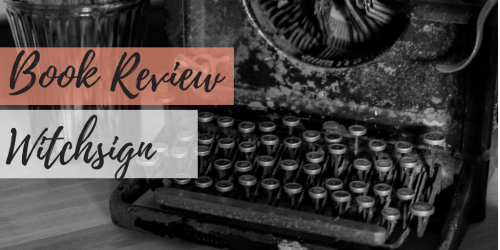 It has been seventy-five years since the dragons’ rule of fire and arcane magic over Vinkerveld was ended, and the Empire was born. Since, the tyrannical Synod has worked hard to banish all manifestations of the arcane across the lands.

However, children are still born bearing the taint of the arcane, known to all as witchsign. So each year the Emperor sends out his Vigilants across the continent to detect the arcane in these children. Those found tainted are taken, and never seen again. Steiner has always suspected his sister Kjellrunn of bearing witchsign. But when their father’s attempt to protect her from the Invigilation backfires, it is Steiner who is mistakenly taken. However it is not death which awaits Steiner, but an Academy where the children with witchsign learn to master their powers – some at the cost of their lives. Steiner is determined to escape the Academy and protect his sister from this fate.

But powerful enemies await him at every turn, and Steiner finds himself taken on a journey straight into the heart of the Empire’s deepest secrets, which will force him to reconsider everything he has known about witchsign.

I really loved Den Patrick’s The Erebus Sequence so I was really excited to pick up a copy of this brilliant sounding book. The cover is just gorgeous and it sounds like a captivating story. Witchsign is the kind of book that you want to read all the time, squeezing in a chapter on the commute, on a lunch break and any other possible time. 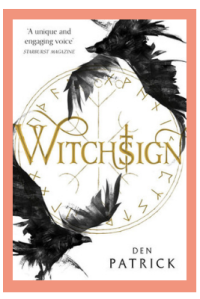 I adored the world of Witchsign. Patrick creates a really fascinating world and the bleak and desolate landscape really comes across in his writing. The magic system and world building are told in a really elegant way, we are told plenty of information without it being a knowledge dump right at the start. It creates a really rich tapestry of magic, dragons and the cruel control of the Empire.

The story is told in alternating POVs between Steiner and his sister Kjellrunn, and I loved both of them as main characters. It’s rare in books with differing POVs that I like both perspectives equally, but in Witchsign I was dying to know what was happening to both characters.

I really enjoyed Patrick’s writing style and I loved the idea that the Steiner as ‘the one chosen’ is actually chosen by mistake. The story was quick paced, full of action and I definitely grew attached to the mix of characters. In Witchsign Patrick has created an enticing world and I can’t wait to delve back in with book two.