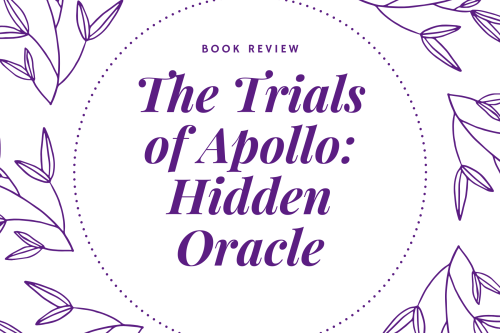 Series: The Trials of Apollo #1
Release Date: May 3rd 2016
Publisher: Penguin Random House
Pages: 376
Find it on: Goodreads. BookDepository. Waterstones.
Source: I was sent an Ebook & audio copy from the publisher and then I purchased a paperback copy
Rating: 3.5/5 stars

How do you punish an immortal?

By making him human.

After angering his father Zeus, the god Apollo is cast down from Olympus. Weak and disorientated, he lands in New York City as a regular teenage boy. Now, without his godly powers, the four-thousand-year-old deity must learn to survive in the modern world until he can somehow find a way to regain Zeus’s favour.

But Apollo has many enemies – gods, monsters and mortals who would love to see the former Olympian permanently destroyed. Apollo needs help, and he can think of only one place to go . . . an enclave of modern demigods known as Camp Half-Blood.

The Trials of Apollo is the first in a new series from Percy Jackson author Rick Riordan. This series follows God Apollo, as he is cast from Olympus and forced to live as a mortal teenager. When he makes it to Camp Half-Blood he discovers his enemies are plotting to bring down Olympus permanently.

This is such a fun and fast paced adventure. The reader is dropped right in the middle of the action and it doesn’t let up for the whole book. If you’re looking for a story that will sweep you along, this is definitely a series to try. The plot is a little on the predictable side, but the story is enjoyable and steeped in Greek and Roman mythology.

Apollo is a great protagonist, he’s self centred and vain – believing everything should revolve around him. He has a bit of a hard time of being mortal and it’s interesting seeing him grow as a person and learn what it means to be a human. I also really liked Meg, she’s a kick-ass character and I loved her little sidekick Peaches. This is actually my first time reading a Rick Riordan book and while I really enjoyed it I think I would have been better off starting with the Percy Jackson series, as it’s referenced all the way through this story. I think I would have been able to appreciate the story more if I’d known the previous stories.

I’ve been curious about these books for a long time and after reading this one I’m definitely going to pick up more from this author. If you love action packed stories with a dash of comedy, this is going to be just the series for you.