Power is much easier to acquire than it is to hold onto. Jude learned this lesson when she released her control over the wicked king, Cardan, in exchange for immeasurable power.

Now as the exiled mortal Queen of Faerie, Jude is powerless and left reeling from Cardan’s betrayal. She bides her time determined to reclaim everything he took from her. Opportunity arrives in the form of her deceptive twin sister, Taryn, whose mortal life is in peril.

Jude must risk venturing back into the treacherous Faerie Court, and confront her lingering feelings for Cardan, if she wishes to save her sister. But Elfhame is not as she left it. War is brewing. As Jude slips deep within enemy lines she becomes ensnared in the conflict’s bloody politics.

And, when a dormant yet powerful curse is unleashed, panic spreads throughout the land, forcing her to choose between her ambition and her humanity…

From the #1 New York Times bestselling author Holly Black, comes the highly anticipated and jaw-dropping finale to The Folk of the Air trilogy.

Today for Waiting on Wednesday I wanted to talk about Queen of Nothing by Holly Black – the third and final book in the Folk of the Air trilogy. I had planned to leave this one until later in the year because the book was due for release in 2020. However with the update that Queen of Nothing has been brought forward for a November release – I couldn’t help but get excited that we are only a few short months away from the conclusion of this series. With the exception of reading The Spiderwick Chronicles as a kid I’ve never read anything by Holly Black until I picked up The Cruel Prince but I absolutely fell in love with her writing style and the magnificent world that she’s built. I know The Cruel Prince has a lot of divided opinions but it is honestly one of my favourite series. I’m sad that it’s going to be the last book but I’m dying to know what’s going to happen next. The first two books have ended on major cliffhangers so I have no idea how it will all turn out. This series is full to the brim with magic, betrayal and the best characters. If you haven’t picked it up yet I’d definitely recommend binging the first two books in the series. The Queen of Nothing is publishing November 19th 2019 from Hot Key Books. 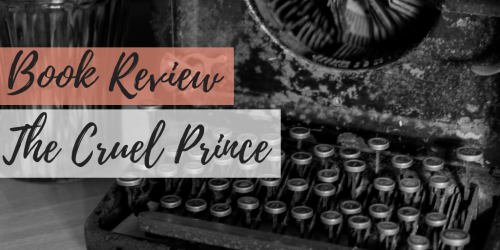 Series: The Folk of the Air #1
Release Date: January 2nd 2018
Publisher: Hot Key Books
Pages: 370
Find it on: Goodreads. BookDepository. Waterstones.
Source: I was sent a copy of this book through ReadersFirst.
Rating: 5/5 stars

Of course I want to be like them. They’re beautiful as blades forged in some divine fire. They will live forever.

And Cardan is even more beautiful than the rest. I hate him more than all the others. I hate him so much that sometimes when I look at him, I can hardly breathe.

Jude was seven when her parents were murdered and she and her two sisters were stolen away to live in the treacherous High Court of Faerie. Ten years later, Jude wants nothing more than to belong there, despite her mortality. But many of the fey despise humans. Especially Prince Cardan, the youngest and wickedest son of the High King.

To win a place at the Court, she must defy him–and face the consequences.

As Jude becomes more deeply embroiled in palace intrigues and deceptions, she discovers her own capacity for trickery and bloodshed. But as betrayal threatens to drown the Courts of Faerie in violence, Jude will need to risk her life in a dangerous alliance to save her sisters, and Faerie itself. 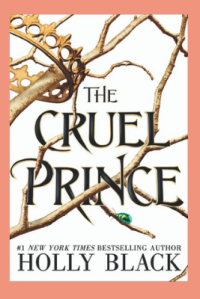 This is such a perfect book. I couldn’t put it down and I definitely didn’t want it to end. The Cruel Prince is the first in a new series from ‘Faerie Queen’ Holly Black, and I can totally see why she deserves that name because this book is so stunning. Books about the Fae are not something I read particularly often, though I recently read An Enchantment of Ravens and really enjoyed it. With that in mind I decided to give this a go, and boy was I not disappointed.

Jude Duarte has become my most favourite character ever. She’s a strong woman, she wants to be a knight and fend for herself and she doesn’t expect others to do the work for her. She’s brash and determined, she makes mistakes and works hard. Black portrays her so realistically and so humanly, that I could not help but love her. She’s a fantastic protagonist and it’s so exciting to watch her grow and evolve. That doesn’t mean there aren’t plenty of other amazing characters. I loved Cardan and Vivi and The Roach too.

For me what made this book really stand out was the lush, vivid settings and the plot that kept me guessing. Each character in this book has their own motives, and everyone is playing a game. I was never sure who to trust, who was being honest and who wasn’t. So many times I’ve read a book and I’ve guessed what’s going to happen, but that definitely wasn’t the case with The Cruel Prince.

The book is pretty fast-paced and there’s plenty of action and excitement to keep you on the edge of your seat. If you love faerie stories, or you’re a fan of the immensely talented Holly Black, you need to pick up this book now, you won’t regret it.

Series: The Folk of the Air #2
Release Date: 8th January 2019
Publisher: Hot Key Books
Pages: 336
Find it on: Goodreads. BookDepository. Waterstones.
Source: I bought a copy from my local Waterstones.

The first lesson is to make yourself strong.

After the jaw-dropping revelation that Oak is the heir to Faerie, Jude must keep her younger brother safe. To do so, she has bound the wicked king, Cardan, to her, and made herself the power behind the throne. Navigating the constantly shifting political alliances of Faerie would be difficult enough if Cardan were easy to control. But he does everything in his power to humiliate and undermine her even as his fascination with her remains undiminished.

When it becomes all too clear that someone close to Jude means to betray her, threatening her own life and the lives of everyone she loves, Jude must uncover the traitor and fight her own complicated feelings for Cardan to maintain control as a mortal in a Faerie world.

This book gave me such a book hangover I’m not sure I will ever enjoy another book again.

I’m pretty sure that’s all the review you need but I’ll attempt to go into a little bit more detail. The Wicked King is the second instalment in the Folk of the Air series. This is already a massively popular series and book one – The Cruel Prince – was on everyone’s best of 2018 list (including mine). Going into The Wicked King I had a certain amount of trepidation – what if it’s all filler and suffers from second book syndrome?

Well that absolutely was not the case. The Wicked King is unputdownable. The stakes are higher, the plot twists are earth shattering and it is without a doubt one of my all time favourite books. Holly Black has created this immensely lush and beautiful world that is just a dream to be in. The characters are so complex and fascinating – Jude and Cardan are everything but there’s also a whole host of secondary characters who fascinate me so much. Jude is such a fascinating protagonist, fighting for what she wants and I loved seeing things from her perspective.

There’s plenty of action and excitement in The Wicked King too – not to mention a dash of romance. If you’re a fan of twisty fantasy this is definitely a series to pick up and binge read immediately – if you’ve already raced through The Cruel Prince then The Wicked King is worth the wait and definitely needs to be your next read. 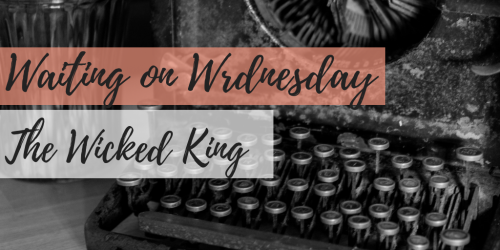 The first lesson is to make yourself strong.

After the jaw-dropping revelation that Oak is the heir to Faerie, Jude must keep her younger brother safe. To do so, she has bound the wicked king, Cardan, to her, and made herself the power behind the throne. Navigating the constantly shifting political alliances of Faerie would be difficult enough if Cardan were easy to control. But he does everything in his power to humiliate and undermine her even as his fascination with her remains undiminished.

When it becomes all too clear that someone close to Jude means to betray her, threatening her own life and the lives of everyone she loves, Jude must uncover the traitor and fight her own complicated feelings for Cardan to maintain control as a mortal in a Faerie world.

This week for Waiting on Wednesday I thought I would rant about how much I am dying to read The Wicked King by Holly Black. For those who aren’t familiar this is the second instalment of The Folk of the Air, the first book being The Cruel Prince. The Cruel Prince has had tons of buzz and pretty much every blogger and booktuber has said how much they love it. I read it in one sitting at the start of the year and it’s still definitely one my favourite books of 2018. I am simply dying to know what is going to happen next and so many people have received ARCS and have been given copies at events that I feel like I might be one of the few people who haven’t read it yet. This is definitely going to be one of the first books I pick up in 2019 and I’m hoping it is going to be worth the wait!