They say the thirst of blood is like a madness – they must sate it. Even with their own kin.

On the eve of her divining, the day she’ll discover her fate, seventeen-year-old Lil and her twin sister Kizzy are captured and enslaved by the cruel Boyar Valcar, taken far away from their beloved traveller community.

Forced to work in the harsh and unwelcoming castle kitchens, Lil is comforted when she meets Mira, a fellow slave who she feels drawn to in a way she doesn’t understand. But she also learns about the Dragon, a mysterious and terrifying figure of myth and legend who takes girls as gifts.

They may not have had their divining day, but the girls will still discover their fate… 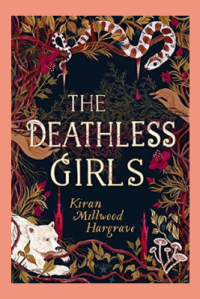 When I first heard that Kiran Millwood Hargrave’s YA debut would be based on the Brides of Dracula I was desperate to get my hands on a copy of this book. I love Dracula and all things related, and his brides are characters are definitely characters I would love to see more of. The story follows twin sisters Lil and Kizzy as their lives are ripped away from them and they become slaves of the vicious Boyar Valcar. As the harsh reality of their new life sets in they hear about the infamous Dragon, a bloodthirsty ruler who takes girls as gifts. When Kizzy is taken to the Dragon, Lil along with the help of her new friend Mira, must fight to save her sister.

The Deathless Girls is a really beautiful and engaging take on the Brides of Dracula. It’s a compelling tale and I found it so easy to fall into this story of evil rulers and bloodthirsty monsters. I had sort of expected this story to be about the lives of the vampires, but instead it is focused on the story that leads to them becoming the deathless girls. It wasn’t quite what I had thought it was going to be, but I enjoyed it nonetheless.

Hargrave’s writing is incredibly beautiful and I’ve really enjoyed every book of hers I’ve read previously – The Deathless Girls is no exception. It’s a cleverly plotted tale and I really liked going on this adventure with the characters. I similarly thought the characters were really interesting and complex – Kizzy is the beautiful one is often in the limelight, with Lil being in her shadow. I liked seeing the dynamics between the two sisters and watching them grow as characters as they race to the Dragon’s castle.

I’m not particularly a big romance person but I really enjoyed the romance in this story. I thought it was really well executed – the tentative, nervous beginning of the relationship to something much stronger. The Deathless Girls has some dark themes and also explores quite a wide range of topics. It’s a clever and intense story, one I think a lot of readers will really fall in love with. If you’ve read Hargrave’s other works too I think you’re definitely going to want to pick this one up.

Today I'm participating in the blog tour for #MortmainHall by Martin Edwards! I really enjoyed this suspenseful and engaging mystery! #bookblogger #books #bookstagram #bookstagramer #martinedwards #historicalfiction #mystery #booksofinstagram #headofzeus #midaspr #newreleases
✨Currently Reading✨ Day five of lockdown and I am on my third book so far. Almost finished The Devouring Gray by Christine Lynn Herman and I'm loving it so much! #books #bookblogger #thedevouringgray #yafiction #yabooks #fantasy #thedeckofomens #christinelynnherman #bookstagram #booksofinstagram #titanbooks #currentlyreading
More exciting book post in the form of The Last Wife by Karen Hamilton. I loved The Perfect Girlfriend so I can't wait to binge this over the weekend. Massive thank you to @headlinebooks for sending me a copy to review! 💕 #thelastwife #theperfectgirlfriend #karenhamilton #books #upcomingrelease #bookstagram #booksofinstagram #instabook #crime #thriller
I am abandoning all plans to go home and read The Bookish and the Beast by Ashley Poston! I love this series so much and I can't wait to read the next instalment. Massive thank you to @mybookishlife and @jamiedoespr for sending me a copy of the book to review! 💜 #bookstagram #onceuponacon #geekarella #theprincessandthefangirl #bookishandthebeast #ashleyposton #ya #contemporaryfiction #contemporaryya #booksofinstagram #geek #instabook #bookblogger #bookreviewer #newbooks