This is going up a little late because I am mainly focused on reading books for the Medieval-A-Thon readathon however there are a couple of books outside that that I would love to get to this month, so let’s dive into my TBR!

Gyen Jebi isn’t a fighter or a subversive. They just want to paint.

One day they’re jobless and desperate; the next, Jebi finds themself recruited by the Ministry of Armor to paint the mystical sigils that animate the occupying government’s automaton soldiers.

But when Jebi discovers the depths of the Razanei government’s horrifying crimes—and the awful source of the magical pigments they use—they find they can no longer stay out of politics.

What they can do is steal Arazi, the ministry’s mighty dragon automaton, and find a way to fight…

Little Creeping Things – Chelsea Ichaso
When she was a child, Cassidy Pratt accidentally started a fire that killed her neighbor. At least, that’s what she’s been told. She can’t remember anything from that day, and her town’s bullies, particularly the cruel and beautiful Melody Davenport, have never let her live it down.

But then Melody goes missing, and Cassidy thinks she may have information. She knows she should go to the cops, but she recently joked about how much she’d like to get rid of Melody. She even planned out the perfect way to do it. And then she gets a chilling text from an unknown number: I’m so glad we’re in this together.

Now it’s up to Cassidy to figure out what really happened before the truth behind Melody’s disappearance sets the whole town ablaze. 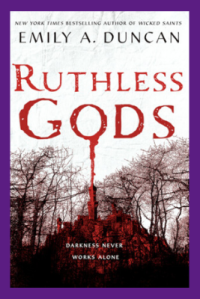 Nadya doesn’t trust her magic anymore. Serefin is fighting off a voice in his head that doesn’t belong to him. Malachiasz is at war with who–and what–he’s become.

As their group is continually torn apart, the girl, the prince, and the monster find their fates irrevocably intertwined. They’re pieces on a board, being orchestrated by someone… or something. The voices that Serefin hears in the darkness, the ones that Nadya believes are her gods, the ones that Malachiasz is desperate to meet—those voices want a stake in the world, and they refuse to stay quiet any longer.

One night in 2012, Zhang Guo Xing takes a group of European clients to a fashionable high-end nightclub in Shanghai. While there, he meets a strikingly beautiful young Finnish woman called Naemi Vieno Kuusela. The physical attraction between them proves irresistible, and they embark on an intoxicating affair. But Naemi is not what she appears to be…

To Zhang’s surprise, she veers between passion and wariness, conducting the relationship entirely on her own terms. He feels compelled to find out more about her, and is swiftly drawn into a web of intrigue, mystery, and horror. Is she a ghost? A demon? Do the living dead walk the streets of twenty-first century Shanghai?

So those are the books I’m going to try and get to in May. If you’ve read any of these I’d love to know what you thought, and also what you’re planning to read in May!