Series: All the Stars and Teeth #1
Release Date: August 4th 2020
Publisher: Titan Books
Pages: 416
Find it on: Goodreads. BookDepository. Waterstones.
Source: The publisher kindly sent me a copy of this book to review
Rating: 4.5/5 stars

As princess of the island kingdom Visidia, Amora Montara has spent her entire life training to be High Animancer – the master of souls. The rest of the realm can choose their magic, but for Amora, it’s never been a choice. To secure her place as heir to the throne, she must prove her mastery of the monarchy’s dangerous soul magic.

When her demonstration goes awry, Amora is forced to flee. She strikes a deal with Bastian, a mysterious pirate: he’ll help her prove she’s fit to rule, if she’ll help him reclaim his stolen magic.

But sailing the kingdom holds more wonder – and more peril – than Amora anticipated. A destructive new magic is on the rise, and if Amora is to conquer it, she’ll need to face legendary monsters, cross paths with vengeful mermaids, and deal with a stow-away she never expected… or risk the fate of Visidia and lose the crown forever.

All the Stars and Teeth is an epic fantasy adventure that follows Amora Montara, princess of Visidia and future ruler of the kingdom. To claim her thrown she must show the kingdom her abilities to work and control soul magic, but on the night of the demonstration things go horribly wrong and she must flee the island. She meets the mysterious Bastian and ends up on an adventure to save her kingdom from a dangerous new force.

I really love books with pirates in them and when I heard about All the Stars and Teeth I was really intrigued by the story. I found myself hooked on this incredible tale almost straight away and I loved every minute of it. Grace has created a fascinating world full of magnificent characters. This story was just so easy to get lost in, and I can’t wait to see what happens in book two.

All the Stars and Teeth has a really fast paced plot, and there’s plenty of action to keep the reader on the edge of their seat. There’s epic battles, deadly sea monsters and some really fascinating magic. The thing I loved most about this story was the world building and the magic system – the magic system in particular I thought was so unique and interesting. Amora’s ability to do soul magic as well as the curse magic used in the story fascinated me so much. There’s tons of history about the kingdom and the Montara family that it felt incredibly well fleshed out.

Likewise I really liked the characters in this story. Amora is a great protagonist, having thought she was going to rule all her life it was so interesting watching her grapple with the knowledge that everything is not what she thought in the kingdom. I also really liked Bastian and the quick banter the two have. Grace has written a captivating tale and I did not want to put this one down.

If you’ve looking for a gripping tale with high stakes, full to the brim with magic and adventure, All the Stars and Teeth should definitely be your next read.

Series: The Devouring Gray #2 (See my review of book one here!)
Release Date: April 21st 2020
Publisher: Titan Books
Pages: 416
Find it on: Goodreads. BookDepository. Waterstones.
Source: The publisher kindly sent me a copy of this book to review
Rating: 4.25/5 stars

The teenagers of Four Paths must save their home, in the sequel to hit fantasy The Devouring Gray. For fans of Stranger Things, Riverdale and The Raven Cycle

Though the Beast is seemingly subdued for now, a new threat looms in Four Paths: a corruption seeping from the Gray into the forest. And with the other Founders preoccupied by their tangled alliances and fraying relationships, only May Hawthorne seems to realize the danger. But saving the town she loves means seeking aid from the person her family despises most–her and Justin’s father.

May’s father isn’t the only newcomer in town–Isaac Sullivan’s older brother has also returned, seeking forgiveness for the role he played in Isaac’s troubled past. But Isaac isn’t ready to let go of his family’s history, especially when that history might hold the key that he and Violet Saunders need to destroy the Gray and the monster within it.

Harper Carlisle isn’t ready to forgive, either. Two devastating betrayals have left her isolated from her family and uncertain who to trust. As the corruption becomes impossible to ignore, Harper must learn to control her newfound powers in order to protect Four Paths. But the only people who can help her do that are the ones who have hurt her the most.

With the veil between the Gray and the town growing ever thinner, all of the Founder descendants must put their grievances with one another aside to stop the corruption and kill the Beast once and for all.

The Deck of Omens follows the same characters as book one, and it was fascinating getting to see them as their relationships continue to evolve. I enjoyed the alternating POVs, and Harper was definitely my favourite of the main protagonists. I really loved the history and folklore that Herman has created for Four Paths and it was fascinating learning the history of the townspeople.

While I really enjoyed The Deck of Omens, I preferred The Devouring Gray. The story was still fascinating, but it didn’t grip me in the same way. It was brilliant seeing the Herman expand on the world she has created and I loved the creepy atmosphere she created. This series has so many things that I love, magical powers, strange towns with a mysterious history and a really interesting cast of characters.

The Deck of Omens comes to a satisfying conclusion, and I really enjoyed the duology overall. It’s full of twists and turns and despite being over four hundred pages I absolutely flew through it. This duology has been pretty hyped but I would definitely say it was worth all the buzz. If you haven’t had a chance to pick up this fast paced fantasy duology, I’d definitely recommend giving it a go.

London, 1901. After the death of Queen Victoria the city heaves with the uncanny and the eerie. Séances are held and the dead are called upon from darker realms.

Samuel Moncrieff, recovering from a recent tragedy of his own, meets Helena Walton-Cisneros, one of London’s most reputed mediums. But Helena is not what she seems and she’s enlisted by the elusive Lady Matthews to solve a twenty-year-old mystery: the disappearance of her three stepdaughters who vanished without a trace on the Norfolk Fens.

But the Fens are a liminal land, where folk tales and dark magic still linger. With locals that speak of devilmen and catatonic children found on the Broads, Helena finds the answer to the mystery leads back to where it started: Samuel Moncrieff.

When I first read the synopsis of The Golden Key (and saw that stunning cover) I was completely intrigued. The story follows Samuel-Montcrieff, a young man recovering from a recent tragedy and residing in Victorian London. He encounters a lady named Helena Walton-Cisneros, who finds herself caught up in solving the mystery of three young women who disappeared in the Norfolk Fens twenty years ago – but all is not as it seems, and the Fens are a remote and wild place.

I really enjoyed this blend of Gothic horror and mystery story. It was such a fascinating tale and I was completely captivated by Womack’s beautiful writing style. Her writing was so vivid and evoked a really strong sense of setting in the Norfolk Fens. This strange wild place really came alive within the story. Womack’s writing is almost lyrical and it was so easy to just become completely absorbed in the story.

The Golden Key is multi-layered tale and I enjoyed the pacing of the story. I did feel the story jumped around a little between people and what was going on, which did make some aspects a little difficult to follow but overall I found this to be an incredibly engaging story. I thought the characters were well fleshed out and the slightly eerie/ sense of other world-ness of the Fens really created a sense of atmosphere within the story.

If you’re a fan of gripping mystery stories with a touch of the Gothic supernatural, this will be a book you absolutely adore. The Golden Key is an impressive debut, and I can’t wait to see what Marian Womack writes next.

After moving into a new house, journalist Harry Hendrick wakes up with tattoos that aren’t his…

When washed-up journalist Harry Hendrick wakes one morning with a hangover and a strange symbol tattooed on his neck, he shrugs it off as a bad night out. But soon more tattoos appear: grisly, violent images which come accompanied by horrific nightmares – so he begins to dig deeper. Harry’s search leads him to a sinister disappearance, torment from beyond the grave, and a web of corruption and violence tangled with his own past. One way or another, he has to right the wrongs. 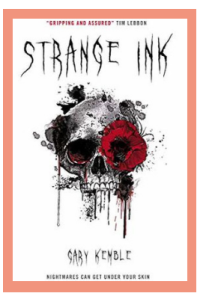 This is a hard hitting thriller that is completely unlike anything I’ve ever read before. The story follows a journalist struggling with his career who one day wakes up with a tattoo he has no memory of getting. He believes it to be a drunken mistake but as more tattoos begin to appear he learns that something much darker is going on. The idea of tattoos appearing that weren’t yours really intrigued me and I’m so glad I picked this up. It’s a dark mysterious story that hooks you from the very first chapter.

The plot is intricately weaved and incredibly clever. It’s a mystery/thriller with a pinch of horror and a dash of romance. It mixes together to create a really memorable and enjoyable read.

Harry is a really fascinating protagonist. His job at the Chronicle leaves much to be desired and things aren’t really going his way. I really enjoyed watching him progressed as the story went on, and there’s an impressive amount of character growth in this story. He’s a complex character and one that readers are really going to grow attached to.

The story is pretty quick paced with short chapters that make you keep saying “one more chapter.” Strange Ink’s original concept, gripping writing and beautiful cover should certainly make it top of your wish list this autumn.