Her ship is gone, her crew is captured and notorious mercenary Androma Racella is no longer the powerful Bloody Baroness, but a fugitive ruthlessly hunted across the Mirabel Galaxy. The bloodthirsty Queen Nor now rules most of the galaxy through a mind-control toxin and she’ll stop at nothing to destroy her most hated adversary.

Andi will risk anything, even her precious freedom, to find a cure. Stranded with her unlikely ally, Dex, on the unforgiving ice planet of Solera, their plan to infiltrate a black-market city proves dangerously irresistible.

Back in Arcardius, Nor’s actions have opened Mirabel to invasion. As Andi’s crew fights to regain their freedom, Andi and Dex discover a threat far greater than anything they’ve faced before.

Only by saving their mortal enemy can the crew of the Marauder make one last desperate strike to save the galaxy—unaware that a shattering, centuries-old secret may demand the most wrenching sacrifice of all.

1. For those that haven’t read Zenith, can you sum it up in three words?

2. What is the process like for writing the books – do each of you focus on particular characters or do you collaborate on everything?

L: This was a very collaborative duology, where we both worked together on FaceTime and Google Docs, so we could do a lot of the plotting together, (and laughing a lot), and then kind of alternating throughout each POV as we went.

S: For Zenith we wrote on top of each others writing, so we each worked on every character together. Meanwhile for Nexus, we each took a few characters each and wrote 4-5 chapters from each POV then would switch with each other. Both ways worked for us!

L: ZENITH was done in 6 weeks, whereas NEXUS had over a year of time to work on! Second books are difficult, so we’re grateful for that extended time to get the book to where it needed to be!

S: It felt very different because as an author, you cannot expect all books to be done the same way as the last. It was tricky finding that happy medium. We had less time to write Zenith but Nexus almost felt like a (good) upward battle. We learned a lot…and deleted a lot.

4. What was the inspiration behind the story?

L: we just wanted to write a series about friendship, specifically female friendships that don’t turn sour. Our own friendship helped spark the idea!!

S: Friendship and our love for space. We wanted to create a book where girls could be friends without turning against each other. We also just wanted to have an epic space opera with a diverse cast of characters like they do on Firefly and Star Wars.

5. Now that Nexus is about to be released, what are you working on next?

L: I have an upcoming book (stay tuned on info for that!!) full of outlaw girls and alien horses, dark magic and mayhem.

S: Im working on an urban folklore fantasy novel called Project Red (no the official title). You can follow my progress on it over on its IG page: @Projectredbook 🙂

6. Finally can you recommend us a good book you read recently?

S: THE CHOSEN by Taran Matharu! So. Good. Its about a group of kids who suddenly disappear, just to be transported to another world and from there, things get really EPIC. It has lost history, dinosaurs, an *amazing* cast of characters and an ancient, unknown evil who is playing puppeteer.

Massive thank you to Lindsay and Sasha for participating in this Q&A and make sure to check out the other stops on the tour! 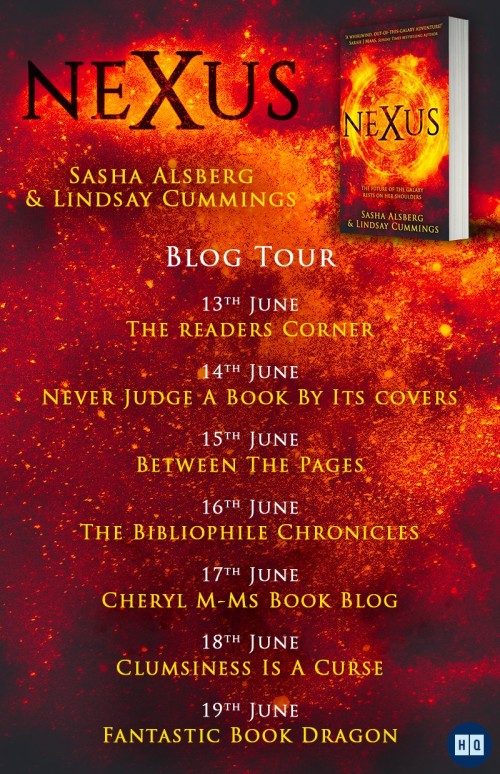