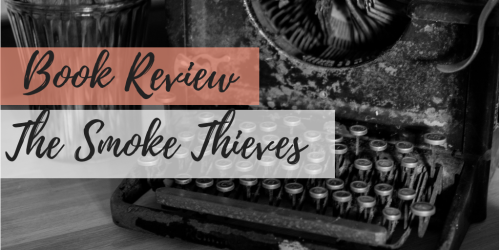 Series: The Smoke Thieves #1
Release Date: 3rd May 2018
Publisher: Penguin
Pages: 512
Find it on: Goodreads. BookDepository. Waterstones.
Source: I received an ARC of this in an Illumicrate box.

A princess, a traitor, a hunter and a thief. Four teenagers with the fate of the world in their hands. Four nations destined for conflict.

In Brigant, Princess Catherine prepares for a loveless political marriage arranged by her brutal and ambitious father. In Calidor, downtrodden servant March seeks revenge on the prince who betrayed his people. In Pitoria, feckless Edyon steals cheap baubles for cheaper thrills as he drifts from town to town. And in the barren northern territories, thirteen-year-old Tash is running for her life as she plays bait for the gruff demon hunter Gravell.

As alliances shift and shatter, and old certainties are overturned, our four heroes find their past lives transformed and their futures inextricably linked by the unpredictable tides of magic and war. Who will rise and who will fall? And who will claim the ultimate prize?

This is my first time reading a book by Sally Green. I know loads of people read and loved her Half Bad series, but I haven’t had the chance to pick it up yet. I was therefore unsure what to expect with this book, but I thought it was an excellent start to what I’m sure is going to be a phenomenal series. 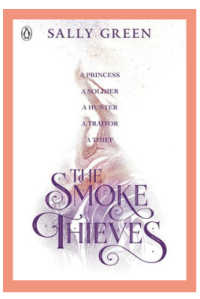 The book has been dubbed “Game of Thrones for a younger audience” and I can totally see the similarities. The world building is good, with this wide world full of magic and different kingdoms. I loved the politics in this book, so many of the characters were scheming and vying for different things. There were plenty of battles and fighting and the book was a real page turner.

The story really sucked me in and I raced through the final few chapters. The story follows five main characters (a princess, a soldier, a traitor, a hunter and a thief) and each chapter alternates point of view for them. Although I liked all the characters I did feel like five was maybe too many. There were certain ones I preferred over others – I really liked Catherine and Ambrose, but was less interested in March. The characters were well fleshed out and I’m really looking forward to seeing how they develop as the series continues.

The chapters are really short so it definitely made me say ‘oh just one more chapter’ until it was the wee hours of the morning. Fast paced and exciting, The Smoke Thieves is a fantasy book that you definitely don’t want to miss.