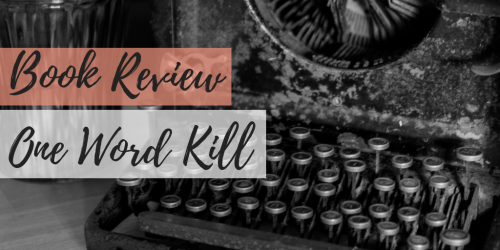 In January 1986, fifteen-year-old boy-genius Nick Hayes discovers he’s dying. And it isn’t even the strangest thing to happen to him that week.

Nick and his Dungeons & Dragons-playing friends are used to living in their imaginations. But when a new girl, Mia, joins the group and reality becomes weirder than the fantasy world they visit in their weekly games, none of them are prepared for what comes next. A strange—yet curiously familiar—man is following Nick, with abilities that just shouldn’t exist. And this man bears a cryptic message: Mia’s in grave danger, though she doesn’t know it yet. She needs Nick’s help—now.

He finds himself in a race against time to unravel an impossible mystery and save the girl. And all that stands in his way is a probably terminal disease, a knife-wielding maniac and the laws of physics. 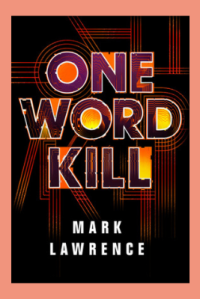 Mark Lawrence has once again made me completely fall in love with a wonderful cast of characters and an intensely gripping story. One Word Kill follows Nick – a mathematical genius who learns he’s dying of cancer. Nick and his friends play Dungeons and Dragons to escape this harsh reality but when a strange man begins following Nick and brings him some dire warnings, the gang’s real life becomes crazier than they ever thought possible.

This book is a wild ride. From the very first chapter I could feel myself getting absorbed in this story and I really grew attached to Nick, Mia and the gang. The characters are so well described and I loved watching the different dynamics as they interacted with each other and I really liked seeing how things changed with the introduction of Mia to the group. Lawrence seamlessly weaves science fiction elements with worries about being able to dance at parties and it made for a really fascinating story.

The story is full of plot twists and I definitely didn’t see some of them coming. One Word Kill is multi-layered, dealing not only with Nick’s cancer treatment and the mysterious stranger, but also a dash of romance and the secrets of Mia’s past. I felt like each part of the story blended incredibly well making for a fast paced and incredibly gripping plot.

Mark Lawrence is one of my favourite authors and One Word Kill definitely wasn’t a disappointment. The story flows so well that I found myself sitting down to read a few pages and still sitting a long time later because I just had to find out what was going to happen next. Compared with some of Lawrence’s other books this one is on the shorter side and it has definitely left me itching for more in this series. If you’re a fan of Stranger Things, time travel and a rag tag bunch of kids trying to save the world, One Word Kill should definitely be next on your purchase list.