Alys appeared last summer, and then she vanished without a trace. Cait’s new in town and she needs to know the truth: Who is Alys?
“A tantalizing story of summer, secrets and deep unease” – Sue Wallman, author of Lying About Last Summer.

This film, based on Stephen King’s Novella The Body, has a very special place in my heart. Four twelve-year old boys go in search of missing boy Ray Brower. There’s a rumour that he is dead and that his body is lying somewhere outside of town. The boys want to find it. They set off together. They walk and they talk. And as they do they share the biggest and the smallest things of their lives so far in small town Oregon,1959.

Conversations range from survivor guilt over the death of a sibling through to a discussion about who, in a fight between Mighty Mouse and Superman, would win. It’s Superman, by the way. “No way can a cartoon beat up a real guy.” There’s a whole heap of other serious, funny, moving, brilliant, painful conversation in between. The boys encounter danger – a man in a junkyard, leeches in a swamp, and there is the classic moment as they walk along the railway line over a bridge that is a real heart-in-your-mouth-gasp-scream-at-the-screenmoment because by this point in the film you love these boys like they are your brothers or your sons. Well, I did anyway. I still do.

This film was made in 1986 and is definitely one of the main influences that the scriptwriters of Stranger Things the Duffer Brothers, drew on when they created the characters of Will, Mike, Dustin and Lucas. In fact if you haven’t watched this film already then do, and look again at episode 4 of Season 1 of Stranger Things. I’m a huge fan of Stranger Things in part because it draws on so many of the iconic movies of my own 80’s childhood. ET, Poltergeist, Alien and Firestarter immediately come to mind, but there are references that reach far wider, small details or scenes that tip their hat to Indiana Jones (literally – see Hopper) and The Breakfast Club (see Steve and Nancy) and even extend to Karate Kid.

But what I particularly love is that I can watch the show with my teenage daughter who is as hooked as I am despite the fact that she sees none of these 80’s throwbacks and references.

Genius Duffer Brothers! I can’t wait for Season 3. And if you ever ask me if I want to sit down and watch Stand By Me again, I’ll say yes. Always yes. It’s a powerful story about friendship and coming of age and it’s brilliance, for me, never wanes.

Massive thank you to Faye for her wonderful guest post and be sure to check out all the other blog stops for more mysteries. Check back tomorrow for a full review of the gripping My Secret Lies With You! 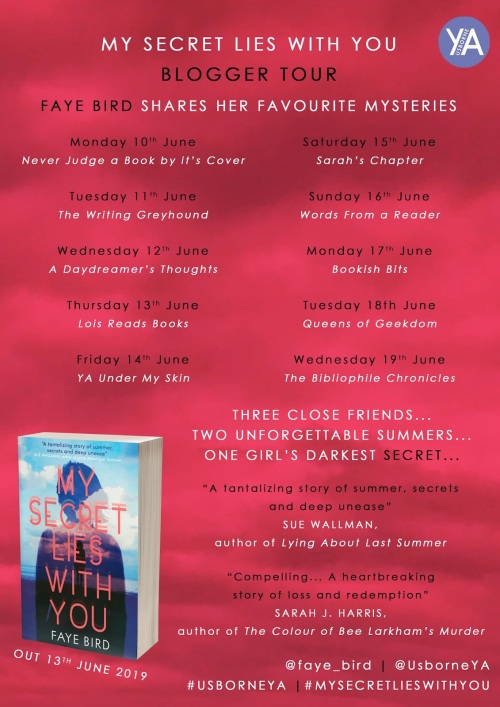 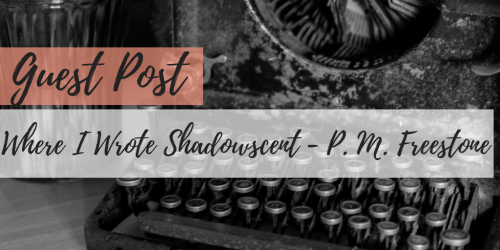 Where I Wrote Shadowscent: The Darkest Bloom by P.M. Freestone

Some people can write anywhere, anytime, with any distractions going on around them. I envy their ability to shut out the world and instantly become one with the words. That said, I’m lucky to have lots of options when it comes to writing spots. And I’ve managed to ‘train’ myself to write in some less likely places, too. Here’s just some of the locations where I wrote Shadowscent:

After many years of writing at home, I’ve recently managed to dedicate most of a room to writing. I painted it the deepest, darkest blue, which I find helps with concentration. It’s also filled with plants—on shelves, stands, even hanging from the walls—most of them on NASA’s list of top plants for using on the ISS, because I’m a nerd like that. There’s also another beloved item hanging from my study wall, my whiteboard. Here’s where the plotting and planning happens, usually beginning with a cast of characters (blurred out in this photo because it’s for a Sekrit Project!)

There’s a reason that multiple libraries feature in Shadowscent. I love them. There was a particular time in my childhood where we couldn’t afford to buy books, so the library was a paradise. When I went on to university study, I veritably lived in libraries. My favourite is the State Library of Victoria in Melbourne, Australia. Then, whenever I visit London, I try to make room for a writing or research session at the British Library. In Edinburgh, I love the Central Library for getting my fix of hushed voices and the scent of old tomes—it also has a gorgeous ceiling to gaze at while figuring out thorny plot points.

I do a fair bit of travel, both for author stuff and for my other job, so I’m often furiously drafting or desperately editing while on the go. I’ve learned to work in airports, and on planes and trains wherever possible. Last year, I finally invested in some noise-cancelling headphones and this has made all the difference.

Scotland doesn’t make a frequent habit of putting on prime outdoor writing weather, but when it does, I’ll grab the laptop and head out into one of Edinburgh’s beautiful parks. I’m also fortunate enough to able to get back to Australia once (sometimes twice) annually, so I squeeze in as much outdoor writing time while I’m there—hat and SPF 30+ essential! My favourite place is on the veranda at my sister’s house, if I can get the locals to let me concentrate…

In the dream she is not herself.

Belief is Catherine’s gift, or it was once, growing up in the shadow of an extraordinary friendship amongst a cacophony of voices trying to tell her who to be. Now, in her thirties, Catherine knows what she has lost and what she has survived. Her professional life is on course and she has a new relationship with Simon, a writer who shares her imaginative and creative worlds. But when Catherine arrives in Budapest in winter 1993 to begin researching a novel based on the poet, Attila József, she starts dreaming the life of a young woman imprisoned after the 1956 Uprising. More disconcertingly, by day this woman, Selene Virág, is with her, dreaming Catherine’s life just as she dreams Selene’s. Obsessed with uncovering the facts, Catherine discovers that Selene was a real person who lived through the persecution of Jews in Hungary during WW2, but what is most disorienting is that Selene believed Attila József to be the father of her daughter, Miriam, despite the fact that József committed suicide in December 1937, eighteen years before Miriam was born. How do the three lives of Catherine, Selene and Attila fit together?

Now take a look at our guest post from author Jan Fortune on what anchors our characters!

As someone who works as an editor and runs a busy independent press, carving out time to write can be difficult. A trilogy of novels is a particularly ambitious undertaking when time is limited, but the Casilda trilogy has had hold of my subconscious for a long time and had to be written. Day to day, I write first thing every morning, but this tends to be ideas, journalling, notes, rather than actually writing the book I’m working on.

For that, I have to grab evenings and parts of weekends, but to write well I’m someone who needs big stretches of time. So, whilst the evening and weekend writing is fine for first drafts and later editing, to get into flow I generally go away from home. I work from home so this shift in environment seems to signal to my brain that this is time for deep work and creativity.

A Remedy for All Things was largely written in Budapest, where it’s based, and, in addition to providing local detail and texture, moving place altered my perspective of the novel I was writing. I’ve found that having the space to go into that wonderful trance state, that only long blocks of writing provide, was essential to putting together a trilogy.

Of course, any novel with a complex timeline demands lots of work on continuity and threading its themes. Doing this across three novels has been a fascinating challenge and I discovered early on that one of the most powerful techniques for keeping the continuity tight was not only time away to write, but also using physical objects that related to character development. The objects that appear and re-appear across the trilogy are like threads on which the story is woven.

So several objects assumed importance in communicating themes through the novels and particularly in A Remedy for All Things, which acts as the bridge around which the whole trilogy hangs.

My protagonist, Catherine wears a pendant that first appears in This is the End of the

Story. She finds it beside her bed, during a trip to Toledo to search for traces of the 11th century Muslim-princess-turned-saint, Casilda — she dreams that her friend, Miriam, is with her and wakes to find a tiny hamsa, a hand of Miriam symbol.

The necklace becomes not only Catherine’s link back to Miriam but to Selene, another main character, who is imprisoned at the end of the 1950s after the Hungarian Uprising and whose life Catherine begins to dream when she visits Budapest in the early 90s.

Objects ground us. People often use objects as parts of how they identify themselves and how they want others to perceive them. Objects also hold memories.

There’s an antique pen in A Remedy for All Things, which Catherine gives to Simon after a visit to the artists’ colony at Szentendre. It will re-appear in the

third book in the trilogy, For Hope is Always Born. It’s personal, says something about the user, adds texture and depth to the narrative, shows the reader some vital detail without telling her what to think or see …

Similarly, there’s a sketchbook given to Catherine in Paris that once belonged to Selene’s father. It becomes not only a symbol of a better way of life that Selene and her family (and so many Jewish families lost in the years before, during and after WWII) but also a motif for the future.

Objects don’t always have to be momentous to add richness to a novel. Some of them are simply everyday artefacts that nonetheless communicate something of a person or a period. I was keenly aware of this when I visited the Attila József Museum. In A Remedy for All Things, Catherine is in Budapest researching her own book, a fictionalised account of the life of Attila József, so I wanted to know more about the poet who committed suicide in 1937.

Not only were examples of his hand-writing on display, but other personal objects. The retractable pencil he wrote with; a facsimile of a rocking horse that was his only toy as a young child and which he gave to his mother for firewood when they had none. And a small change purse. The purse subsequently went into a scene when the Attila of my novel first meets Selene, adding a detail that is unobtrusive but hopefully one of the many details that build into an authentic image of the character.

Catherine traces Attila’s surviving relatives and is shown a book he once owned, by my fictionalised version of Zsuzsanna Makai, Attila József’s niece. There’s something very strange about this book. It looks like an ordinary copy of Carson McCullers’ The Ballad of the Sad Café, yet on this object the plot might turn. To find out how I hope you’ll read the book …

The Remedy For All Things is available now from Cinnamon Press! Thank you so much to Jan for writing this piece and you can find lots more about her books over at https://janfortune.com/